Debates around evidence-informed teaching and attempts to convince others using evidence have led me to make several observations, four of which I share in this series of posts. In my first post, I suggested that the bit of evidence you find most compelling might not be the bit someone else finds most compelling. This post focuses on my second observation:

It’s easy to fall into unhelpful “all-or-nothing” thinking. For example, governments and NGOs (particularly in developed countries) between them regularly communicate messages encouraging people to:

If people feel they are being bombarded with such messages incessantly, or supporters of the above messages regularly promote stronger versions of the message, however, they are likely to be put off – i.e. the impact will be the opposite of what the proponents of the message would like. For example, the UN has repeatedly called for policy-led approaches to reduce meat consumption. Such calls are often pounced upon and amplified by vegan activists (perhaps motivated by ethical issues more than climate-related arguments) that suggest that the solution is for everyone to eliminate meat and dairy consumption immediately, rather than merely reduce it at.

The message reaching the masses therefore isn’t necessarily the message put out by the original proponents of evidence-informed action. This may be for better or for worse—but is often for the worse. This is because many consider adopting a 100% plant-based diet to be unattainably and undesirably extreme, and subconsciously dismiss the entire idea of reducing meat consumption. With less incessant messaging and fewer mutations of the message, these people might instead have made modest reductions to their meat consumption. Unfortunately, “all-or-nothing” thinking often misleads us into thinking that the only options available to us are those at the extremes.

“All-or-nothing” thinking is seemingly subconscious and happens frighteningly often in the education world. I have had several alarming conversations recently with new, inexperienced maths teachers. These teachers seemed to have gleaned from edu-Twitter and blogs that there is never, ever room for inquiry in maths, because “inquiry is less effective than explicit instruction.”

Speaking strictly as a maths teacher, while I appreciate that explicit instruction makes sense (particularly when introducing new concepts), I strongly believe that “mathematics without inquiry” is not mathematics at all. This is not to say that inquiry needs to feature in every lesson—far from it. Indeed, exactly as my observation states, while some teachers have received the message that there is no room for inquiry, I don’t know of any heavyweight proponents of explicit instruction that have ever seriously suggested this. Some have even tweeted the following graphic, and acknowledge that the sweet-spot might include some enquiry: 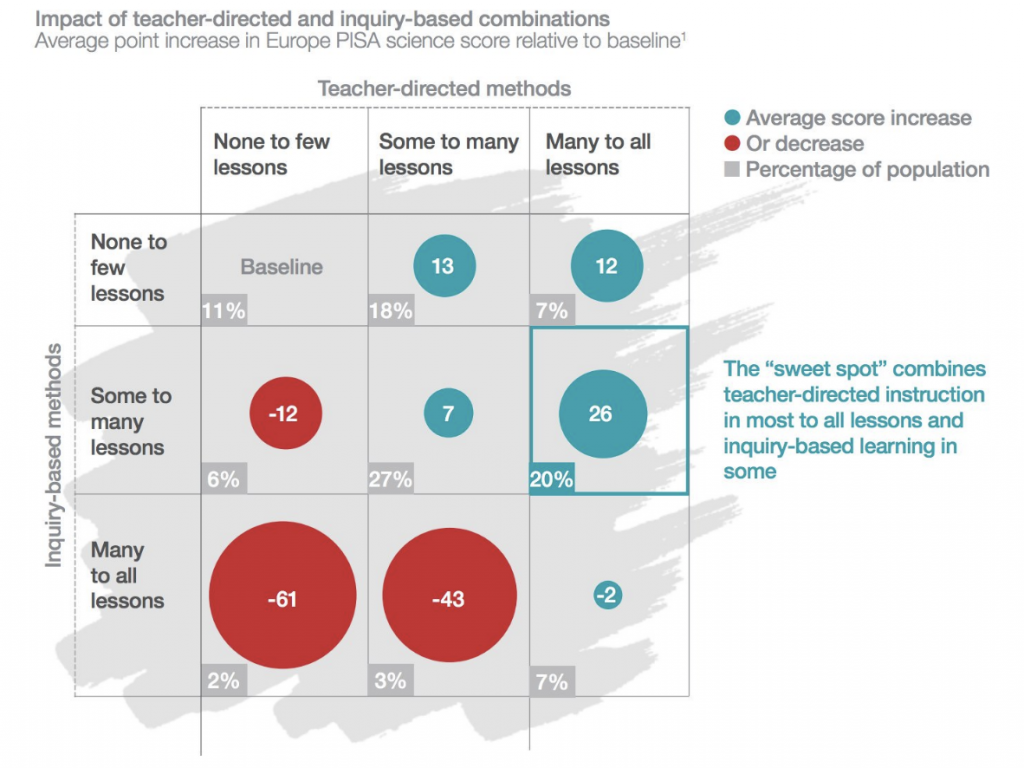 I’ll look at observations 3 and 4: